Home » Vegan Tips » Are Starburst Vegan? Everything You Need to Know 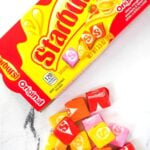 Chewy and fruity Starburst are colorful candies. However, if you have eliminated animal products from your diet, you may be wondering, are Starburst vegan? In this post I review everything you need to know about this fruity treat, so you can make an informed choice when it comes to grabbing a piece of this popular candy.

I get a lot of questions about whether or not certain foods, especially candy are vegan-friendly? In the past, I have answered…

Today, I’m exploring the ever-so-popular candy, Starburst. Starburst is a popular chewy and fruity candy that has been around for decades made by the Wrigley Company. If you follow a vegan diet and want to indulge in a candy treat, reaching for a fruity candy might seem like a safe bet.

However, when you turn the package around to take a look at the ingredient list of many popular candies, you’ll see a long list that is difficult to decipher. After all, most mainstream candy companies do not add the “V” for vegan seal on the front of their products.

But before you reach for your favorite fruity flavored candy, there are a few ingredients you should look out for. Many artificial food colorings, preservatives, texture agents, and even sugars are not vegan. This brings us to the question at hand, are Starburst vegan?

As you can see Starburst is not full of healthy natural ingredients. But the most concerning ingredient for vegans is gelatin. Gelatin is made from the proteins and peptides that come from bones, connective tissues, and the skin of animals.

Therefore, Starburst that is made and sold in the US is not vegan.

Taking a look at the ingredients in the UK Starburst, you will notice one significant difference. They do not contain gelatin. So, does that mean that Starburst made in the UK is vegan?

The label on the UK version of Starburst indicates that they are suitable for vegetarians. There is not any added dairy to the UK Starburst, so by those accounts, Starburst made and sold in the UK is vegan friendly.

Palm Fat: Otherwise known as palm oil. Palm oil is not made from animal products, however, the process and production is not animal friendly. Rainforests are deforested to make room for crops, and as a result, animals lose their homes. The production of palm oil also leads to ethical concerns over the exploitation of workers, and child laborers. As a result, many vegans do not consider palm oil to be a vegan-friendly ingredient.

Glucose Syrup: In most cases, glucose syrup is made from the hydrolysis of corn starch. Although it is not specifically stated what type of starch the glucose comes from, it is most likely corn, so this ingredient would be considered vegan.

Sugar: White sugar is vegan friendly unless it’s been processed with bone char. This is a common practice in the US, not in the UK, so in this case, this sugar is likely vegan friendly.

These products share similar ingredient lists to the original, but there are a few differences that are important to note.

With all this in mind, Starburst Minis are not vegan!

Xylitol is a plant-derived sweetener, and carnauba wax is derived from a plant native to Brazil. However, the ingredient to be concerned about here is the food coloring, Red 40 Lake, which is likely tested on animals.

With this in mind, Starburst Gum is not vegan, if you are avoiding products that use ingredients that have been tested on animals.

Confectioner’s glaze also known as shellac comes from secretions of insects. It is used to create a shiny coat on jelly beans and other candies. While it doesn’t sound as if it is non-vegan at first glance, it is derived from insects, and therefore, not vegan friendly.

You will note that the last ingredient listed is beeswax. Beeswax comes from the honeycomb of the honeybee. Since this ingredient is derived from animals, or in this case, insects, it is not considered vegan.

Starburst Gummies are not vegan.

Does Starburst have gelatin?

These vegan products make for an excellent substitute for traditional Starburst candies and are easily available for purchase.

Made with organic ingredients, it’s gluten-free, non-GMO, and has no artificial flavors or colors. It’s also certified vegan, so you can feel better about indulging in this chewy fruit treat.

Organic, gluten-free, non-GMO, no artificial ingredients, and vegan certified. Plus its Climate Pledge Friendly which means that it uses sustainable ingredients that help preserve our Earth.

Organic, certified vegan ingredients, gluten-free, non-GMO, and free of the 8 most common allergens. With no artificial flavors, dyes, or high fructose corn syrup.

While Starburst made in the United States are not vegan friendly, there are several vegan and organic alternatives out there that will satisfy your sweet tooth. These treats still contain sugar but are made with natural food coloring that comes from actual fruits and vegetables. Enjoy them on occasion!