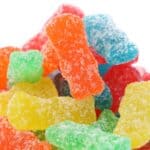 Are Sour Patch kids vegan? A quick glance at the ingredient label, and you would think, yes, they are vegan. However, as you take a closer look at those ingredients it becomes more complicated. In this post, I take a critical look at each ingredient to help provide you with a more thorough answer to this seemingly simple question.

Sour Patch Kids are one of the most popular candies in the country – you see them at nearly every movie theater, every grocery store, and even in the checkout lines at some clothing stores. The brand has an array of choices in their Sour Patch Kids line, Watermelon Sour Patch, and even Sour Patch Punch straws. Their flavors include orange, lime, redberry, blue raspberry, pink strawberry, grape, and pineapple.

The answer is, well, a little complicated, similar to the question regarding, “Are Oreos vegan?”  To really answer this question, we have to dive deeper into the ingredients and the definition of what it means to be “vegan.” These yummy sour treats contain some ingredients that are considered controversial in the vegan world.

What does it mean to be vegan?

There is no straight answer to this question.  I know that doesn’t sound very helpful.  Many people do consider them to be vegan friendly because the ingredients are not one’s that typically come from animals, but here’s what I do know – they include sugars, artificial flavorings, glycerin, and food coloring.

Some of these may have been tested on animals or could be derived from an animal bi-product.  If you follow a strict vegan diet and want to stay from anything that has a chance of being any of these, then you may want to stay away from Sour Patch products.

Do Sour Patch Kids Have Gelatin?

Gelatin is the main ingredient that vegans look for in candy to know if it is vegan-friendly or not.  That is because gelatin is made from boiling parts of skin, tendons, ligaments, and animal bones from pigs or cows with water.

Here’s the good news – No, Sour Patch Kids do not have gelatin, which is actually rare for a mainstream, gummy-type candy.  This is one reason why many people consider these to be vegan friendly.  While some other candies are bound together with the use of agar agar, or pectin, these candies use cornstarch and corn syrup instead of gelatin.

Just a note – if you are in the United Kingdom, the packages for Sour Patch Kids in your country do state that they have gelatin in them, meaning that those are not vegan friendly.

Sugar is not always vegan-friendly.  It is made of either sugar beets or sugarcane. If the sugar is made from beets it is turned into sugar using a diffuser. However, the use of bone char is used if the sugar comes from sugarcane. Since many manufacturers use both beet sugar and cane sugar, it is difficult to trace where the sugar comes from and how it has been processed. The bone char is used to give sugar its white color. Some companies, though, use granular carbon instead of bone char to refine their sugar, making it vegan friendly. There is no way to know how the sugar in these candies was processed/refined, so if you don’t want to chance it, this may knock them out of the vegan category for you.

Mondelez International is the company that produces Sour Patch Kids. According to their website, they state, that they have various sugar suppliers. Some of those sugar suppliers use bone char in their refining, and some do not. There is no way to know for sure which supplier was used in the box you pick up at the store.

This is an ingredient that sometimes comes from animal fats.  Sometimes products will contain vegetable glycerin, which is vegan friendly, but Sour Patch products do not specify what type is used in their candies.  If you’re not comfortable with the fact that this may have come from animal fat, you’ll want to steer away from Sour Patch candies.

Because some artificial colors are tested on animals, this makes them controversial in the vegan world.  The most infamous color to look out for is red 4, which is not in Sour Patch products, but they do contain Red 40.  This can be made out of petroleum which is sometimes tested on animals, making this a controversial ingredient when you are trying to determine if these are a vegan-friendly treat.

All Sour Patch products mention artificial flavors on their ingredients list, but do not specify what they are.  Because some labs test these on animals such as mice and rats, they are not always vegan friendly, but with these candies, there is no way to know.  If you are on a very strict vegan diet, this may be a reason to stay away from Sour Patch Kids.

Sour Patch makes several different products, the most popular being their Sour Patch Kids.  There is no clear answer on whether these are vegan or not because there is no way to know how their ingredients were processed.  They seem vegan-friendly at first glance, but if you’re really familiar with where each ingredient comes from, some of them are controversial.

As you can see Sour Patch Kids in the UK are not vegan or vegetarian because they contain gelatin. You will also notice that the food coloring used in the UK version is different from that of the US version. This is because synthetic food coloring in the US is banned in the UK and EU due to health problems.

Like with Sour Patch Kids, the Sour Patch Watermelons leave a bit of a gray area as to whether or not they are vegan.  They contain sugar that could have been refined using cattle bone (many sugars are refined this way, but with products like this there is no way to know if it was or not).  They also contain vague “artificial flavors”.

Yes, Sour Patch Kids and their other products are gluten-free. There is no wheat or gluten in them.

Sometimes you just can’t help but crave a sweet treat.  There are some yummy alternatives to Sour Patch Kids & Sour Punch Straws that taste just as delicious and are guaranteed vegan-friendly.

Yum Earth makes sour candies that can be found at Target, or even on Amazon.  I love their Organic Sour Beans.

Squish is another brand that makes vegan-friendly candy.  They have SO many options.  I’ve never seen it in stores, but they have a wide variety available on their website.  Not all of their products are vegan, though, so be sure to select that category when browsing.

Another brand that sells vegan sour candies is Pink Panda. Their candies come in cute shapes, have less sugar, have no artificial flavors or colors, and are vegan!

If you’re really adventurous, or just love to cook, try making your own vegan sour candy!  I’m sure that it would be delicious. If you try this, be sure to come back and let me know how it turned out!

When looking at Sour Patch Kids, Watermelon & Punch Straws, there is no clear-cut answer on if they are vegan or Not.  It depends on how strict you are on living a vegan lifestyle. However, you can rest assured that no obvious animal ingredients such as eggs, or honey are in these candies.