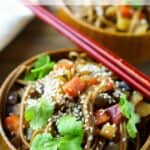 If you’re new to the vegan lifestyle or are hosting a get-together for vegan family or friends, then my guess is you landed here after asking yourself (then google), are noodles are vegan? While I can’t give you a definite yes or no answer, I can share with you which noodles are vegan and which ones to avoid!

Don’t let the simplicity of noodles fool you! Noodles, the bane of anyone on a low-carb diet existence, and for a good reason! They are hearty, comforting, fun to eat, fast to prepare, easy to make, and versatile, making them hard to resist and a great addition to any meal. I enjoy making chop suey and teriyaki noodles on the regular!

But have you ever wondered if noodles are vegan or if they contain hidden animal byproducts? If you have, you are not alone. This question comes up a lot among people who want to reduce or eliminate animal products from their diets. The answer, however, is a little more complicated than one might think.

It’s relatively easy to avoid the obvious animal-based goods such as meat, milk, cheese, and eggs on a vegan diet. The tough part is finding the less obvious non-vegan ingredients you’re eating that contain animal byproducts, especially in noodles! Manufacturers have gotten really good at disguising ingredients on their labels.

I am sure you’ve noticed it. Ingredient lists contain a bunch of large words, 20 letters long that you can barely pronounce – making them hard to understand and even deceptive at times. With so many additives and overly processed foods on the market today, it’s all too easy to consume animal byproducts hidden in the ingredients list.

But not to worry! We will go through everything you need to know about vegan noodles in this blog post, so you can make an educated decision So, let’s dig in and answer the big question: are noodles vegan?

What Ingredients Would Cause Noodles To Be Non-Vegan?

When it comes to noodles, eggs are the primary component that will determine whether or not a noodle is vegan-friendly. If egg whites or egg yolks are used in the dough-making process, the noodles will not be vegan. In addition to eggs, some pasta brands even include dairy products such as milk, milk powder, butter, or whey protein in their dough, which makes them non-vegan. Only noodles that do not contain any animal products whatsoever are vegan.

How to Tell if Pasta Is Vegan-Friendly

Deciding whether or not certain foods are vegan-friendly can be difficult and at times, even be overwhelming, especially if you are just starting this new vegan lifestyle. The best way to know if a noodle, or any food for that matter, is vegan is to read the ingredient list on the back of the package to see whether the ingredients contain any animal-derived products, such as eggs, egg yolks, milk products, or butter. Always examine the labels very carefully because non-vegan ingredients can be easily disguised as vegan-friendly products and can sneak up on you if you aren’t paying close attention.

Recently, larger companies have been including notes on the bottom of ingredient list labels informing consumers that goods are produced on equipment that also processes items containing eggs or items that are produced on a dedicated vegan-friendly lane. This has been very helpful! Vegan-friendly products are slowly becoming easier to differentiate from non-vegan products.

What Noodles are vegan-friendly?

Is pasta vegan? In terms of pasta noodles, most people purchase them dried and pre-packaged, usually in a box such as brands like Barilla and Ronzoni. Spaghetti, macaroni, linguine, rigatoni, penne are only a few examples of the many distinct varieties of noodles available on the market today. Dry, boxed noodle ingredients usually only include wheat flour and a few vitamins and minerals. Non-Vegan ingredients such as eggs and milk are rarely found in boxed noodles because their shelf life is very limited.

Although not all household brands of packaged noodles have a “vegan-certified” seal, most are still vegan-friendly.

Over the past few years, companies have become more and more inventive in their efforts to produce more pasta for a vegan lifestyle. Pasta can now be made from a wide variety of ingredients, such as rice, beans, lentils, sea kelp, yams, and sweet potatoes. Many of these noodles are even gluten-free and high in vitamins, minerals, and protein!

What noodles are not vegan-friendly?

Freshly made pasta is almost never vegan, though most packaged boxed pasta is. The fresh dough usually always contains eggs or some other animal byproduct. This includes fresh packaged pasta found in the refrigerator or deli section of the supermarket. Eggs are an animal-based food and therefore do not qualify as a vegan-friendly food. It may be difficult to follow a vegan diet while dining out at someone’s house, buying fresh pasta, or eating in an Italian restaurant because most restaurants make their pasta in-house with dough containing animal products, but it never hurts to ask if they have any vegan-friendly options available.

In a nutshell, yes! Ramen noodles are a fast and simple dinner. They’re cheap and delicious, but are they vegan? The noodles themselves are made with wheat-based flour, water, oil, and salt, making them vegan-friendly. However, if you’re preparing pre-packaged instant ramen with the little silver flavor packs, be cautious of the ingredients or added sauces. Most flavor packets contain dehydrated, powdered meat, bone broth, or other animal products that go against a vegan lifestyle. So always read the label carefully beforehand. If you’re in search of a true vegan-friendly pre-packaged Ramen, Top Ramen’s oriental flavored instant ramen is your best bet because it does not contain any meat or dairy products whatsoever. Also look for ones with chili, garlic, and soy sauce.

Yes. Udon noodles are, in fact, vegan. Udon noodles are very popular comfort food in Japanese cuisine. Wheat flour and water are the only ingredients used to make udon noodles, making them vegan-friendly. The wheat flour base of the dough makes the noodles thicker than other typical noodles and gives them a unique texture. They’re one of the few types of fresh noodles that don’t normally contain any egg products. However, if going out to a restaurant be aware that the recipes used with udon are often not vegan.

Noodles are delicious comfort food that we all enjoy. We shouldn’t have to give up pasta because we want to follow a vegan lifestyle. There are so many vegan options available out there, but we just have to know where to look and educate ourselves.

Occasionally non-vegan items are hidden in “vegan-friendly” foods or dishes that most people would automatically assume are vegan, under an unfamiliar name, or disguised as a vegan-friendly name. That’s why it’s important to read labels carefully and know what you’re looking for before purchasing any food item. The key to successfully living a vegan lifestyle is doing your research in advance; learning about ingredients found in certain foods before buying them will keep you on track.

If you’re ever unsure if a product contains any animal byproducts and you’re unable to get or find an answer, it might be best if you just avoid it altogether until you can find the correct answer. This way, veganism can remain a breeze for you. Veganism has never been more accessible than in this day and age, thanks to all these wonderful resources available at our fingertips, such as websites, cookbooks, forums, and blogs, just to name a few. With a little bit of know-how, veganism can be simple, fun, and delicious.

Vegan-friendly noodles can be found practically anywhere. Just remember to always read the labels carefully, as some vegan-friendly foods may have hidden non-vegan ingredients. With a little research and planning, veganism can easily include delicious noodles into your diet without having to forgo this classic comfort food.