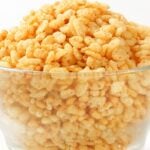 Are Rice Krispies vegan? When it comes to choosing breakfast cereals, you would assume that most are vegan. However, there are added ingredients in many cereal brands that are not vegan friendly. In this post, I explain why Kellogg’s Rice Krispies cereals are not vegan, and some alternatives you can enjoy instead!

Who doesn’t remember the joy of biting into sweet marshmallowy Rice Krispie Treats as a kid? It’s one of those iconic recipes that immediately brings me back to my childhood.

Or, how about the snap, crackle, pop sound they make when you pour your milk on top of your bowl of cereal in the morning?

No matter who you are, you certainly know of the elves Snap, Crackle and Pop, and have memories of watching their commercials between your Saturday morning cartoons.

However, now that you’re older, and changed your diet, you may be wondering if this classic cereal is vegan friendly.

For a complete list of over 70+ vegan cereal brands, be sure to check out my post all about vegan cereals.

That may come as a surprise, since at first glance, you may be wondering what ingredients could be added to them that would make them non-vegan.

What are Rice Krispies Cereal?

Kellogg’s Rice Krispie cereal has been around for nearly 100 years! They came onto the scene in 1928. They are made of crisped rice that has been cooked, dried, and toasted, and then shaped to look like a small berry. When milk is added to the cereal they make the iconic snap, crackle, pop sound.

While a popular morning cereal, they are perhaps even more popular in the form of Rice Krispie Treats. The delicious, gooey, crunchy bar made of rice cereal and melted marshmallows.

What is a vegan diet?

A vegan diet is one that excludes all animal products, or animal derived ingredients from one’s diet. This means no meat, poultry, fish, dairy products, eggs, or honey.

Instead, vegans eat foods that come from plant sources. This doesn’t always mean it is a healthy plant source, as they are many processed foods that are also vegan.

However, you will find that vegans eat the following:

What ingredients are in Kellogg’s Rice Krispies Cereal?

I’ve already told you that they are not vegan, but why? Let’s take a closer look at the list of ingredients.

They are not vegan because they include Vitamin D3, which is clearly identified on their ingredient label. Vitamin D3 is derived from lanolin, which is the oil on sheep’s wool.

It is also safe to assume, that the sugar added is refined using bone char since it is likely made in the United States, and is not organic.

While the brand Kellogg’s Rice Krispies are not vegan, other similar rice cereals could be vegan.

Even though the Kellogg’s brand is not vegan, there is more than one vegan option at grocery stores.

Nature’s Path Organic Crispy Rice Cereal: Made with vegan ingredients. Very similar to the Kellogg’s brand in look, and taste.

365 Organic Brown Rice Cereal: Healthy simple ingredients made with brown rice which is higher in fiber.

One Degree Brown Rice Crisps: Higher in fiber, since it’s made with brown rice. It’s also non-GMO, and gluten-free certified.

One Degree Veganic Sprouted Brown Rice Cacao Crisps: Similar to the one mentioned above, only with added cacao to give it a chocolate flavor.

How do you make vegan rice krispies treats?

Check out my recipe for vegan rice krispie treats!

If you have any additional questions, please comment below.