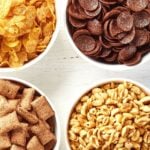 While there are plenty of cereals that are vegan on the market today, not all of them are created equal. I set out to find some of the best vegan cereals on store shelves today, and some of them may surprise you!

We all know the importance of breakfast. It is a great way to start off your day with energy and keep you going until lunchtime. Not to mention a well-balanced breakfast can also help you maintain a healthy weight.

While there are a plethora of healthy cereal options on the market today, it’s no shock that not all of them are considered healthy.

When you follow a vegan diet you want to make sure that all of the ingredients follow your lifestyle choice. The good news is that there are a lot of vegan-friendly cereals on the market today!

What Makes a Cereal Vegan?

Cereal isn’t vegan, by default. Manufacturers often add animal-derived ingredients (such as milk) to their products, and these are impossible for vegans to consume without modifications of some kind.

Cereals for vegans must not contain any animal products whatsoever in its ingredient list. In order for a cereal company to label itself “vegan,” it must be certified by the Vegan Society or verify its ingredients with a vegan certification agency.

The certification process is rigorous and requires vegan-friendly ingredients only. This includes things like organic soy milk, coconut oil (instead of butter), and vegan sugar.

For a cereal to be labeled “vegan,” the ingredients should also come from an ethical and sustainable supply chain.

It’s important to note that many cereals labeled as vegan do contain honey in the list of ingredients.

However, for some vegan followers, honey is acceptable because it’s a natural and minimally processed sweetener. But, if you feel that honey is not a part of your veganism, make sure to double-check the ingredient label even on boxes clearly labeled as vegan cereals.

Are There Any Dedicated Vegan Cereal Brands?

There are quite a few cereal brands that include vegan options, but only a few of which contain a majority of vegan cereals. Nature’s Path Envirokidz Organic stands out in this category, with several different kinds of vegan cereals. Such as their chocolate koala crisp, peanut butter panda puffs, and many more. This brand includes the most diverse taste ranges and is the most helpful for kid-friendly vegan options.

Barbara’s Organic is another brand that contains several options, from Corn Flakes to Peanut Butter Puffins.

Kashi is another brand of mainly vegan cereal with whole grain puffs, organic strawberry wheat flakes, and vanilla toasted wheat. Kashi is one of the most protein-rich options for vegans.

The Best Vegan Cereals (Depending on Who You Ask)

The best vegan cereals are those that contain only ingredients from an ethical and sustainable supply chain. While they all have slightly different manufacturing processes, the ingredients are 100% vegan-friendly. There are many different vegan cereal options, and the best is going to vary from person to person, but the fan favorites include:

What Are The Most Vegan-Friendly Cereal Brands?

While it is hard to find a cereal brand that has solely vegan options and only includes vegan ingredients, here are the brands that have the most options and choices. Just make sure to check the box before you purchase to make sure it is from their vegan cereal line.

Common animal ingredients that make cereal non-vegan are eggs, butter, and milk. Which, of course, we are all aware are animal products.

But.. what about the not-so-common ingredients? Many kinds of cereal contain ingredients that you wouldn’t think are animal-derived. Like the use of gelatin to keep the product from getting too soggy or other animal-derived substances.

The sneaky ingredients included in breakfast cereals that make them non-vegan are:

Honey – Honey comes from bees, which makes it an animal byproduct, so anything that has honey included is not vegan. (Again, this one is a blurred line for some vegans)

Vitamin D – Most Vitamin D supplements, specifically anything labeled as Vitamin D3, are usually made from animal fats. Vitamin D2, however, is a safe vegan alternative.

Lanolin – A grease that primarily comes from sheep’s wool. This is also an animal product used in Vitamin D supplements.

Whey Protein/Powder – This is derived from animal-based milk.

Processed Sugar– While this does not contain animal products, some white sugars are processed with animal bone char and would need clarification. However any cereal that uses organic sugar is vegan friendly.

Gelatin – Contains collagen made from animals.

Other Ingredients to Avoid in Cereal

While these ingredients are not animal derived per se, they are ones you want to avoid to start your day healthy and balanced.

Artificial Sweeteners – These include any of the following stevia, saccharin, aspartame, acesulfame potassium or ace-K, sucralose, advantame, and neotame.

Cane Sugar – It’s generally not a good idea to start your day with too much sugar, but for vegans it’s also important to avoid cereals that have added white sugar because it is unknown whether it has been processed with bone char.

Artificial Colors – Some cereals add artificial colors to their cereals, especially the ones that are very colorful such as Fruit Loops, Kix, etc. The over consumption of artificial colors such ad Red Dye 40, and Yellow 5 and 6 have a correlation to hyperactivity in children, as well as other healthy concerns.

How To Eat Vegan Cereal

Everyone knows cereal is best served with milk, but if you’re new to veganism, you may be wondering what your options are for alternative milk products. The first and most popular are nut-based milks such as almond milk and cashew milk. These options have rich flavor and are slightly thicker than most non-dairy milk options, and also have a low-calorie count in their unsweetened forms.

Soy milk is a great option that contains a similar number of proteins to cow’s milk. However the increased isoflavones may affect estrogen levels in high levels of consumption, so keep your intake moderate.

Oat milk is a slightly sweeter option and has high fiber levels. This type of milk has a higher number of carbohydrates compared to other options. Still, it is a dairy-free alternative as it helps in lowering cholesterol due to the kind of soluble fiber included in it.

Rice milk is an excellent option for those with gluten intolerance and who are prone to allergies. This milk is soy, dairy, gluten, and nut-free. Rice milk does contain the highest amount of carbohydrates out of our options and is known to raise blood sugar, so it will likely not be a good choice for people with diabetes.

Coconut milk is a sweet and thinner texture option for cereal milk. It contains the lowest carbohydrates but is also high in saturated fats.

To make your cereal a more complete meal add fresh fruit such as raspberries, blueberries, or sliced strawberries.

Cinnamon Toast Crunch is not certified as vegan and contains Vitamin D3.

Cocoa Pebbles are not vegan certified and contain Vitamin D3.

All Life Cereals are considered vegan because they lack animal products. However stricter vegans may need clarification on how the sugars are filtered to make sure they are not filtered with bone char.

Cheerios are not vegan because they contain honey and Vitamin D3.

Rice Krispies are not vegan as they contain Vitamin D3.

Raisin Bran is not vegan as it contains Vitamin D3 and sugar, which may be filtered with bone char.

Frosted Mini-Wheats are not vegan as they contain gelatin, used for the frosting, which is derived from animal collagen.

Are Honey Bunches of Oats Vegan?

Honey Bunches of Oats are not vegan as they contain honey.

Apple Jacks are not vegan as they contain Vitamin D3.

Lucky Charms are not vegan as they contain gelatin and Vitamin D3.

Frosted Flakes are not vegan as they contain Vitamin D3. Other variations also contain gelatin, processed sugar, and honey.

Where can I buy vegan cereal brands?

You can find many vegan cereals at your local grocery store. For some of the organic brands I recommend Whole Foods, Trader Joe’s, and Amazon.

There are many options when it comes to cereals that are vegan.

To find the one you consider the best, well why not try them all!

Cereals can be tricky to navigate when you’re vegan. The good news is that there are more and more options as time goes on, with many brands now offering at least one or two varieties of cereal for vegans.

When it comes down to picking the best that is a personal preference. Just make sure you read each and every label regardless of the vegan seal to make sure it aligns with your form of veganism.