Home » Vegan Tips » Are Donuts Vegan? (Some Are, Some Aren’t) 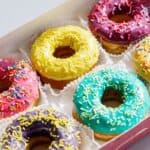 Donuts are a popular, tasty treat, but, when you’re a vegan it can be tricky to find some that are vegan-friendly. In this post, we will explore which donuts are and aren’t vegan-friendly and where you can find them.

Donut shops are a popular destination for those following a vegan diet and non-vegans alike, but there is some confusion about whether or not these sweet treats are considered vegan.  The simple answer is yes – donuts can be vegan! Of course, not all donuts are created equal. Those that are made with eggs and dairy products are not technically considered vegan, but there are plenty of delicious vegan-friendly options out there. Let’s take a closer look at this question and find out the answer!

Most donuts contain non-vegan ingredients. Typically the dough contains butter, eggs, and milk, eliminating it from the vegan category. When I say most donuts, I mean the ones at your local donut shop or the ones that you can grab from the grocery store. While this may sound discouraging if you are a donut lover, there are some that you can still enjoy as a vegan.

Do All Types of Donuts Have Eggs and Dairy?

Not every type of donut contains eggs and/or dairy products, but if I’m being honest, the majority of them do. For example, the main ingredients in most donuts are milk ingredients (whey, skim) and eggs. Some donuts also contain glycerides, which are not always vegan.

How can you tell which donuts are vegan?

If it comes from a chain grocery store or a popular donut chain, it is probably not vegan. All you have to do to identify the difference is ask if it contains eggs or milk, which most of them do. But don’t worry, there are still vegan donut options that you can enjoy!

Where To Find Ready Made Vegan Donuts

I know that it may sound discouraging to hear that most major chains do not have vegan donuts, but don’t lose hope! You can still find vegan-friendly options.

These two popular retailers may not have vegan-friendly donuts in their bakery, but they do in their freezer section! Near the gluten-free frozen foods, you will find Kats Frozen Glazed Donuts, which do not contain any animal products or byproducts, making them a grab-and-go, vegan-friendly option!

Amazon is probably the biggest asset when it comes to finding vegan treats. If you just search for Vegan Donuts, hundreds of options will come up. One of my favorites is the Posh Bakery option.

You will find plenty of vegan donut options in the bakery at Whole Foods! Whether you want chocolate, vanilla, or even blueberry, they have several delicious variations to choose from. If you have an Amazon Prime account, you can even have these delivered to you in most places.

These vegan donuts that are ordered online can be pricey, but once you taste them, you will understand why. Goldbelly spent over a year working on perfecting their vegan doughnuts, which they released in 2020. They were such a hit at their New York City location that they decided to sell them on their website, too. No matter where you live, you can order these tasty vegan donuts and have them delivered. I would opt for the variety pack, which includes blueberry lemon with oat crumble, mocha almond crunch, and even classic plain glazed.

This is another spot where you can order vegan donuts online. Their Vegan Schmegan Assorted Vegan Donut Box includes 4 tasty donuts. The first is a raspberry jam-filled donut with a brioche dough base and a house-made raspberry jam. The second is a cereal milk donut (okay, I know that it says milk, but it’s non-dairy), and it is the most nostalgic, tasty donut you’ll ever have. In this pack, you will get two of each flavor. They are so good that you will be ready to order more before you have even finished your first four!

Many towns have their own local vegan bakeries that can be a great place to order vegan donuts. Because they specialize in vegan foods, they will know what can and can’t go in these donuts and will be sure to stick to that when they are baking. It may take a little research, but I’m sure that you can find a tasty vegan bakery that is not too far from you, or even one that will deliver or ship.

Krispy Kreme donuts are, unfortunately, not vegan. In their original donuts (which they use as the base for nearly all of their donuts), the ingredients list includes dried milk powder, egg yolk, and controversial palm oil. Krispy Kreme does not have any vegan-friendly donut options, but you can always swing by for an iced coffee.

Besides a plain iced coffee, at Krispy Kreme, you can also get juice, a frozen lemonade, or a tea. Krispy Kreme currently does not offer any vegan-friendly food options.

The base for all of the donuts at Dunkin Donuts is their old-fashioned donut. This ingredients list plainly states that these contain skim milk, egg yolks, and palm oil. All of these ingredients, unfortunately, eliminate these donuts from the vegan category. Dunkin Donuts has stated that they plan to expand the vegan options on their menu. Hopefully, this will eventually include donut options!

What vegan options does Dunkin have?

While you won’t find a vegan donut at Krispy Kreme, there are other vegan options that you can enjoy.  A major plus for Dunkin is that most of their bagels are vegan-friendly! You can have the cinnamon raisin, plain, everything, or sesame bagel. They also have a vegan English muffin, hash browns, oatmeal, and avocado toast. They also have coffees and teas with vegan milk options.

It may seem like a lot of work to make your own homemade vegan donuts, but there are several recipes that are very simple to make and result in some absolutely delicious treats! These contain egg substitutes such as chia seeds, and milk substitutes such as soy milk, almond milk, and coconut milk.

Not only are these vegan donuts tasty, but they have a nice crunch on the outside from the cinnamon sugar. They are also very easy to make! Another plus? They are baked, not fried. And contain simple ingredients like all-purpose flour.

Once you see the glaze that goes on these donuts, you won’t be able to resist them! They are sweet, soft, and fluffy. Did I mention that they are also vegan-friendly? Brioche donuts use yeast to leaven them

If you ask me, you can never go wrong with a sweet, jam-filled donut. These vegan donuts are fried, but they are definitely worth the splurge. These donuts make a special treat for any occasion!

Once you have made these tasty vegan donuts, you will never go back to store-bought again. This recipe will make a dozen vegan donuts for you to enjoy.

These doughnuts taste like they are straight out of a (vegan) bakery. You can decorate them however you like, and they will definitely satisfy your donut craving and sweet tooth.

Whether you want to make them on your own or buy them at the store, there are several vegan-friendly options that you can choose from when you are craving a donut.

« Is Peanut Butter Vegan?
Cashew Pesto with Arugula and Basil »