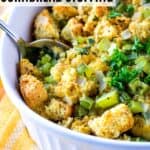 This vegan cornbread dressing with chunks of cornbread soaks up the flavors of onions, celery, and spices, and bakes up moist and fluffy. It’s the perfect addition to your Thanksgiving or holiday menu!

It’s not Thanksgiving without a moist and fluffy stuffing! When I was growing up on Thanksgiving day I didn’t help my mom out a whole lot when it came to preparing our Thanksgiving meal.

She wanted us kids out of the kitchen so she could work her magic. What I do remember is that she used a bag of packaged stuffing, and stuffed it inside the bird the traditional way.

When it was my turn to start preparing our Thanksgiving meal, stuffing left me scratching my head!

I didn’t want to buy packaged stuffing. It wasn’t vegan, and it had processed ingredients.

I couldn’t stuff it in the bird because obviously that wasn’t vegan friendly. So, how was I going to make a stuffing that everyone at the table could enjoy?

That’s when I started doing some research and came up with this recipe for vegan cornbread stuffing!

Thanksgiving in my home likely looks very different than most. My family is not vegan. They want the traditional recipes, including the turkey. I however, am the one preparing the meal for my father, brother, in-laws, husband, and kids.

This puts me in a bit of a predicament, since I only want to prepare vegan dishes. But over the last several Thanksgiving meals I’ve ironed out the kinks!

My husband prepares the turkey, and I prepare the sides (all of which are vegan)! Everyone is happy!

I found a way to create a moist, fluffy, and traditionally flavored vegan cornbread stuffing without having to place it in the bird which means I can enjoy it too!

What is the difference between vegan stuffing and vegan dressing?

Stuffing is traditionally made by placing it in the turkey, while dressing is made by baking in a casserole dish.

Here is a list of ingredients to gather before preparing the stuffing. For exact measurements scroll down to the bottom to find the recipe card.

How to Make Vegan Cornbread Dressing – Step by Step

Step 1: Dry out your cornbread. You can do this by allowing it to sit out and become stale for 1-2 days. If you don’t have that time, chop the cornbread into cubes, and place in the oven set to 250 degrees F, and bake for 30-40 minutes.

Step 2: Preheat your oven to 350 degrees F. Add ¼ cup of vegetable stock to your large sauté pan set to medium-high heat. Add onions and celery. Sauté until soft, about 3-5 minutes.

Step 3: Add basil, thyme, rosemary, and parsley. Stir to coat the onions and celery. Cook for an additional minute.

Add the rest of the vegetable stock and fresh parsley. Bring to a boil.

Step 4: Add dried and cubed cornbread to a large bowl. Slowly ladle broth over the breadcrumbs. Gradually stirring to combine.

Step 5: Transfer cornbread to an 8×8 inch baking dish or similar size. Bake for 25-30 minutes uncovered at 350 degrees F or until top browns.

Serve this recipe at your Thanksgiving meal with friends and family. While stuffing is traditionally served with Turkey, I recommend my vegan stuffed acorn squash as a main dish, and a side or vegan cranberry sauce.

How to Store and Keep

Store leftovers in the refrigerator in a covered air tight container. When ready to reheat, transfer to a microwave safe dish and warm in the microwave.

Vegan Cornbread Stuffing will keep for 3-4 days. It will likely keep for longer but I air on the side of caution when it comes to reheating food.

Check out these other vegan Thanksgiving recipes! 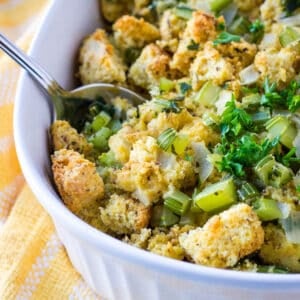 This vegan cornbread dressing with chunks of cornbread soaks up the flavors of onions, celery, and spices, and bakes up moist and fluffy. It's the perfect addition to your Thanksgiving or holiday menu!
5 from 5 votes
By Alison Corey
Print Pin Rate Save Recipe Saved Recipe
Course: Side Dish
Cuisine: American
Prep Time: 15 minutes
Cook Time: 30 minutes
Total Time: 45 minutes
Servings: 10
Calories: 167kcal