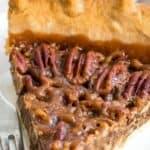 A sweet and nutty vegan pecan pie that is simple to make with a caramel-like consistency! Your guests will never know it’s vegan, and made with a gluten-free crust!

When it comes to Thanksgiving there are two pies that are a must; traditional pumpkin pie, and of course a sweet and nutty pecan pie!

Traditional pecan pie is made with a buttery crust and filled with a combination of pecans, eggs, butter, and some form of sugar, often brown sugar or corn syrup. It is known as a Southern dish that is often served at holiday meals such as Thanksgiving and Christmas.

It’s a bit of a challenge to get the best consistency that will be set considering traditional recipes often call for several eggs. Subbing a vegan egg one to one won’t achieve the same result.

I found a different way to achieve the best consistency without creating a gooey filling. As an added bonus this pie does not have any corn syrup! Instead, a combination of maple syrup, butter, brown sugar, and coconut milk combined with corn starch work together to achieve a caramel texture that sets when cooled.

This recipe turned out great! Next time, I may create vegan pecan pie bars!

Why This Recipe Works

Gluten-Free Pie Crust: This simple homemade pie crust is made with a combination of almond flour, tapioca flour, and oat flour. You can also make a vegan pie crust with regular flour, or use a store-bought vegan pie crust.

Chopped and Whole Pecans: A combination of one cup of chopped pecans makes up the filling and about ⅓ cup of whole pecans for decoration.

Filling: The filling starts with melted vegan butter, and organic brown sugar that is melted and then combined with coconut milk, and pure maple syrup.

Scroll to the bottom of the post to the recipe card for complete measurements.

Step 3: In a small bowl, whisk together the coconut milk and corn starch.

Step 4: Quickly whisk the coconut milk and corn starch into the saucepan over medium heat. Then remove from the heat.

Step 5: Spread the chopped pecans evenly on the bottom of the pie crust.

Step 6: Pour the filling over the pecans, use a spatula to spread evenly. Add the whole pecan around the edge of the pie for decoration (optional).

Step 7: Bake for 30-35 minutes or until the crust is golden brown and the filling is bubbling. After about 15 minutes cover the edges of the pie crust with aluminum foil to avoid the edges from burning.

Step 8: Remove from the oven and allow to cool at room temperature for 1 hour. Then transfer to the refrigerator to chill for 2-3 hours before slicing and serving.

Why is pecan pie considered unhealthy?

This vegan version is still sweet, but it is made with maple syrup and organic brown sugar. I’ve also added less sugar than a typical recipe. The pie crust used for this recipe uses almond flour, oat flour and tapioca flour that is combined with water, so no butter is used at all. This reduces the overall amount of calories and fat for each slice. While pecan nuts are high in fat it is the healthy monounsaturated fat that our bodies need.

While this recipe is not considered a health food, it is lower in sugar, calories, and fat than a traditional recipe while also being vegan and gluten-free.

What is pecan pie filling made of?

Traditional pecan pie filling is made with eggs, butter, and corn syrup. There are slight variations in which different types of sugars are added such as white sugar, brown sugar, molasses, maple syrup, or honey.

How do you serve this vegan pecan pie?

I think pecan pie is sweet enough on it’s own! However, you can serve it topped with coconut whipped cream, or a scoop of vegan vanilla ice cream.

How do you store and keep vegan pecan pie?

Cover and store in the refrigerator for up to 4 days. This pie can be made a few days in advance of your holiday meal. 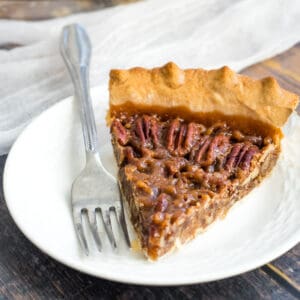