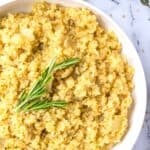 This post may contain affiliate links.  As an Amazon Associate I earn from qualifying purchases. Please read my disclaimer.

This simple bulgar pilaf is made with sautéd onions, vegetable stock, and bulgar wheat. It is served as a side dish, or with sautéd vegetables. My favorite way to enjoy it is with eggplant ratatouille.

If you’re not familiar with bulgar, then you are in for a treat! It is something I quite literally grew up on!

My mom came from an Armenian family. When her mother passed, she became the Armenian cook in the family. She used her mother’s recipes, as well as created her own spin on the traditional recipes that were served when she was growing up.

There were some recipes she didn’t attempt to make! Those usually included the labor intensive breads like choereg, a traditional Easter bread that requires some baking skills, and a lot of patience.

But when it came to sarma (stuffed grape leaves), dolma (stuffed peppers), beoreg (spinach or cheese stuffed phyllo dough), well that was where she shined!

An Armenian feast would not be complete with pilaf. She made it two ways, the one I’m sharing with you today, is made with bulgar. The other variety she made was with rice and thin noodles.

Bulgar pilaf is served as a side dish. It is an accompaniment to shish kabab, or for me, (always the vegetarian), grilled vegetables and tofu kebabs!

We also enjoyed this dish with my mom’s favorite eggplant ratatouille.

Bulgar Wheat: You will need one cup of bulgar wheat. You can buy different varieties. I suggest the medium coarse texture.

Vegetable Stock: When my mom made this recipe she always used chicken broth, but when I became vegetarian she switched to vegetable stock. It’s a simple switch that makes this recipe vegan friendly without losing any flavor. I recommend using a low-sodium broth. I also use the vegetable stock to sauté the onion instead of using oil or butter. This cuts back on the extra calories and fat, and keeps this recipe whole food plant-based.

Onion: Finely chop one small onion, or about 1/2 a cup of onions chopped.

Medium Saucepan: You will need a medium sized saucepan. The same type of pot that you would use to make rice.

Cutting board and chopping knife to chop your onion.

A spoon or fork to fluff your bulgar when it’s done.

How to Make Bulgar Pilaf – Step by Step

Step 2: Reduce heat. Add one cup of bulgar and two cups of broth to the saucepan. Bring to a boil uncovered.

Step 3: Once the broth comes to a boil, reduce the heat. Cover and simmer for 5-8 minutes.

Step 4: Remove from heat, and let sit covered until all of the broth has been absorbed. Fluff with a fork and serve!

What are the health benefits of bulgar?

What is bulgar wheat?

Bulgar is cracked whole grain kernels of wheat that are parboiled before drying and packaging. The parboiling process helps bulgar to cook more quickly than other varieties of wheat. It’s a very inexpensive grain.

What other recipes use bulgar wheat?

While making bulgar pilaf is one way to enjoy this grain, you’ll also find it added to salads, like tabbouleh.

Where can you buy bulgar?

I buy bulgar in the bulk section of my local health food store. You can likely find it at Whole Foods, or other specialty grocery stores as well. When I was growing up we always bought our bulgar from a Middle Eastern market. If shopping at a large chain grocery store look for bulgar where you would buy rice, or in the ethnic food aisle. If you cannot find it in your local grocery store, you can purchase it online.

How do you store dry bulgar?

When you bring your bulgar home from the store, transfer it to an air tight, dry container. Keep it stored in a cool dark place. I use air tight canisters to store my flours, and grains in my pantry.

How long does it take for bulgar to cook?

It takes about 15-20 minutes for bulgar to cook. You start by bringing it to a boil, then reduce heat, simmer, and finally take it off the heat to fully absorb the liquid before fluffing with a fork.

Are there different varieties of bulgar?

Yes, there are several different varieties. Bulgar comes in fine, medium, and coarse textures. The more fine your bulgar the more quickly it will cook.

No, unfortunately, bulgar is not gluten free. It comes from wheat so it does contain gluten.

Fresh Herbs: Add your favorite fresh herbs. Finely chop your herbs and fold them into your pilaf before you’re ready to serve. Parsley adds a nice fresh flavor.

Garlic: If you’d rather not use onion, or you’d like a little garlic flavor, add 2 cloves of minced garlic when sautéing the onions.

How to Store, Keep, and Reheat

Store: Allow cooked bulgar to completely cool before transferring it to an airtight container. Store in the refrigerator.

Keep: Bulgar stored in the refrigerator will keep for 3-5 days.

Reheat: When ready to reheat, transfer to a microwave safe container. Cover and heat for 30 seconds or until warm.

Check out these other healthy vegan side dishes and appetizers!

If you’ve tried this bulgar pilaf, please rate the recipe and let me know how it turned out. You can also follow me on Facebook, Instagram, and Pinterest for more plant-based family recipes your whole family will enjoy!

This simple bulgar pilaf is made with sautéd onions, vegetable stock, and bulgar wheat. It is served as a side dish, or with sautéd vegetables. My favorite way to enjoy it is with eggplant ratatouille.
5 from 5 votes
Print Pin Rate Save Recipe Saved Recipe
Course: Side Dish
Cuisine: Mediterranean
Keyword: bulgar pilaf, how to cook bulgar
Prep Time: 5 minutes
Cook Time: 15 minutes
Total Time: 20 minutes
Servings: 6
Calories: 87kcal